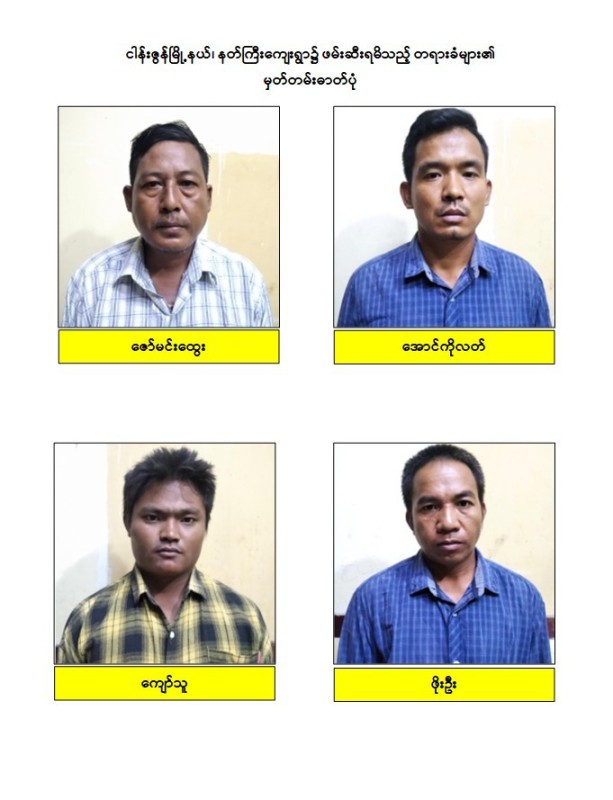 Eight terrorists who beheaded four civilians in Nganzun township of Mandalay Region and Myaung township of Sagaing Region have been arrested by authorities, according to the statement released by State Administration Council on September 22.

Three members of a terrorist group named ‘Zarmani Guerilla Group’: Sai Htet Aung, Hlaing Myo Aung and Kyait Khaing Tun were seized on September 17 in Yaylethaung village located in Nganzun township as the authorities were informed by the public, the statement said.

Authorities received information as per the confession made by Sai Htet Aung, five other terrorists: Zaw Min Htwe, Aung Ko Lat, Kyaw Thu, Pho Oo and Zaw Lin Aung were arrested on September 19 in Natgyi village located in Nganzun township. Zaw Min Htwe was arrested death since he grabbed a weapon from a member of a counter-terrorism force and resisted.

The arrested eight terrorists attended terrorism training for a month in a village located near Nyaungkan village in Myaung township, Sagaing Region in July 2022.

Zarmani Guerilla Group was organized by 44 members on January 2, 2022 to commit terror deeds in the abovementioned townships.

According to the confession made by the arrested terrorists, ‘Zarmani Guerilla Group’ committed four terror killing against innocent civilians in which victims were beheaded by them.