Russian attacks on critical infrastructure have left Kharkiv with a “total” power blackout, Ukrainian President Volodymyr Zelenskyy has said, after reports of “significant gains” by his forces in a regional counteroffensive.

Donetsk has also lost all power, the president tweeted, while Zaporizhzhia, Dnipropetrovsk and Sumy regions are struggling with partial blackouts.

Kharkiv appeared to also be under a complete blackout, with no light visible in the city.

Cars drove through pitch-black streets, and the rare occasional pedestrian used a torch or mobile phone to light their way.

On its western outskirts, a fire raged in a power station reportedly hit in a strike, billowing smoke illuminated by the orange glow of the flames.

Kharkiv governor, Oleh Synehubov, added strikes had left several population centres in his northeastern region with no water supplies either.

“Fires have broken out where these strikes occurred and emergency crews… are containing the blazes,” he wrote on Telegram.

The strikes come after the UK Ministry of Defence said Russia had likely withdrawn units from two front line positions, following a shock advance by Ukrainian forces in the past four days.

“Over the last 24 hours, Ukrainian forces have continued to make significant gains in the Kharkiv region,” the MoD said on Twitter on Sunday.

A jubilant Mr Zelenskyy mocked Russia’s army in his nightly address, claiming it was doing “the best it can do – showing it’s back”.

“And of course, it’s a good decision for them to run,” he said, adding Ukraine had liberated around 2,000 square kilometres of territory since the beginning of September.

He was defiant in the face of power cuts, telling Russia: “History will put everything in its place. And we will be with gas, light, water and food.. and without you!”

Russian military spokesman, Igor Konashenkov, said earlier that troops in the cities of Balakliia and Izyum were being “regrouped” in the Donetsk region, a part of the Donbas.

While Ukraine has recaptured territory in the Kharkiv region, the country’s second-largest city, fighting continues around Kupiansk and Izyum, which are both strategically important cities.

Images from the Kharkiv region show vehicles and checkpoints abandoned by Russian soldiers.

Izyum was captured by Russia at the start of the war and has remained under its control since.

Ukrainian flags have been spotted in villages, towns, and cities in the eastern region. 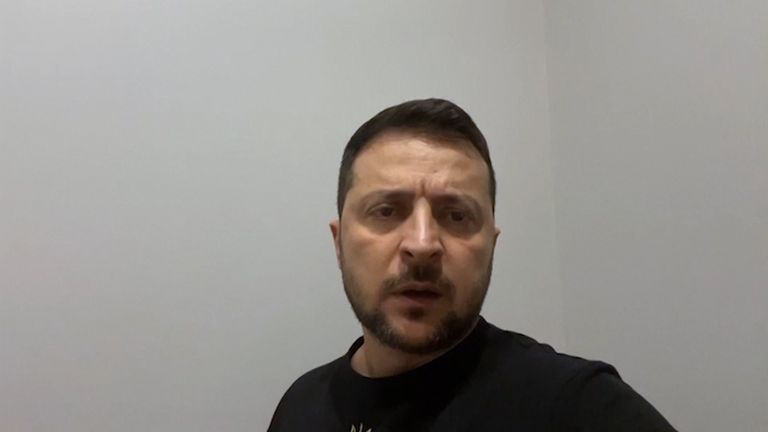 In southern Ukraine, officials were able to shut down the last reactor at the Zaporizhzhia power plant after it had been reconnected to the electricity grid.

The six-reactor plant, which is Europe’s largest nuclear power station, had all its power lines cut off last week due to shelling in the area.

Energoatom, Ukraine’s atomic power operator, said one of the power lines was restored late on Saturday, allowing plant operators to shut down the last reactor.

While both sides accuse each other of shelling near the plant, which has been occupied by Russian forces since the early stages of the war, fighting around it has triggered concerns of a nuclear disaster.