Liz Truss became the United Kingdom’s third female prime minister on Tuesday, replacing Boris Johnson who announced on July 7 that he would resign, leaving the country without a leader at a time of economic uncertainty.

Truss, the former foreign secretary, took office Tuesday afternoon at Balmoral Castle in Scotland when Queen Elizabeth II formally asked her to form a new government in a carefully choreographed ceremony dictated by centuries of tradition. 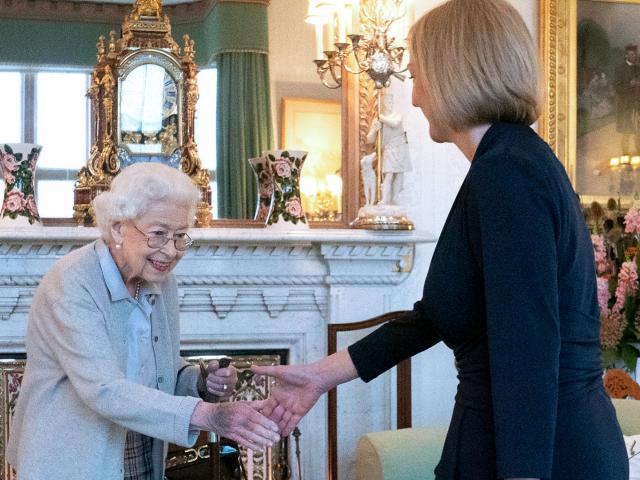 It was the first time in the queen’s 70-year reign that the handover of power took place at Balmoral, rather than Buckingham Palace in London. The ceremony was moved to Scotland to provide certainty about the schedule because the 96-year-old queen has experienced problems getting around that have forced palace officials to make decisions about her travel on a day-to-day basis.

The UK’s Conservative Party elected Truss to head the party and the nation on Monday. She’s known for her hawkish foreign policy and staunch fiscal conservatism in the mold of Thatcher, the so-called “Iron Lady.”

British political analysts predict she will be tough when dealing with Russia and China as well as Iran.

“Liz Truss is a more hawkish person than Boris Johnson, the former prime minister,” Melvin told the Associated Press. “She has, for example, committed to increasing the threat perception of China. So China will be recognized under her premiership, she’s indicated, as a threat to the UK.”

“She is very tough on China,” John Kampfner, the executive director of the U.K. in the World Initiative for the British think tank Chatham House told Fox News. “Britain called China a ‘systemic competitor.’ And she wants to call it an ‘acute threat,’ which is quite some step. Does that go too far for the Biden administration?”

“I think we’re going to have a very radical, right-wing, free-market prime minister, and one that actually is more of an ideologist than a pragmatist,” predicted Steven Fielding, professor of political history at the University of Nottingham.

Other observers think Truss may disagree with U.S. President Joe Biden’s attempt to broker a nuclear deal with Iran.

Nile Gardiner, a former adviser to Thatcher who now works for The Heritage Foundation, told Fox News even though Truss has not taken a stance on the Iran negotiations, some in her Conservative Party don’t like the idea. But even though British and U.S. leaders have recognized the “special relationship” between the two countries for years, it won’t stop her from calling out Biden over some issues.

“I don’t think she’s going to be afraid of picking a fight with Joe Biden over crucial areas of British national interest. She will stand up to the U.S. president where necessary,” Gardiner said.

Truss is under pressure to show quick results at home.

After her election Monday, she told members of her party, “I know, I know, that our beliefs resonate with the British people. Our beliefs in freedom, in the ability to control your own life, in low taxes, in personal responsibility,” Truss said. “And I know that’s why people voted for us in such numbers in 2019. And as your party leader, I intend to deliver what we promised those voters right across our great country.”

She’s being pressured to spell out how she plans to help consumers pay household energy bills that are set to rise to an average of 3,500 pounds ($4,000) a year — triple the cost of a year ago — on Oct. 1, unless she intervenes. She is expected to unveil her plan on Thursday.

The Guardian reports that nearly one-fourth of UK adults (23%) may have to go without heating over the winter months due to skyrocketing energy costs, according to a recent poll. That figure was even higher for parents with children under the age of 18, with 27% saying they would be forced to leave the radiators cold.

“I want to deliver for people,” Truss insisted after she was elected Monday.

Johnson, 58, formally resigned during his own audience with the queen earlier Tuesday. Many political observers expect Johnson to attempt a political comeback, but gave no indication of his plans.

***Please sign up for CBN Newsletters and download the CBN News app to ensure you keep receiving the latest news from a distinctly Christian perspective.***

Inside the Final Days of the Doctor China Tried to Silence